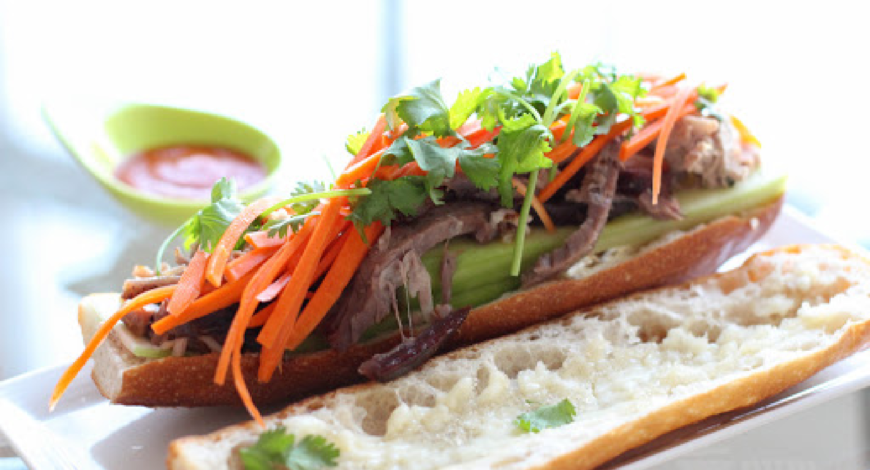 Alongside the likes of phở, spring rolls and bitter-and-sweet Vietnamese coffee, the bánh mì is perhaps one of the most popular and recognizable dishes in the world. A combination of Vietnamese cold cuts, pickled vegetables, pâté, fresh herbs and various sauces all wrapped up in a neat baguette package, the bánh mì is an international staple.

Curious about what kind of ingredients go into the world’s favorite sandwich? This tell-all guide will give you a world-class introduction into the sensation that is the Bánh Mì sandwich.

What is a Bánh Mì?

Traditionally, a bánh mì meant a plain baguette or bread. It wasn’t until the food gained international renown that the name became synonymous with sandwich.

The bánh mì had its beginnings in French cuisine, when French colonizers imported European ingredients such as bread, cheese and butter into their Indochina colonies. For a long time, local Vietnamese were unable to afford such delicacies. And when they did, it was typically eaten the French way – with a spread of cold cuts and dairy products.

The French used their culture and food as a way to suppress the Vietnamese. Thinking that their palate was superior, they forbid any fusion or mixing of their cuisines and they maintained this strict stratification until their eventual removal in the late 1950s.

Free from foreign influence, Vietnamese chefs quickly adapted the Bánh Mì to fit the local palate and lifestyle. Cheese and butter were substituted for mayonnaise and pâté. Fresh herbs and pickled vegetables made use of their accessibility to quality local produce and placing it all between a French baguette was the pièce de résistance – Vietnam was finally free from their colonial masters.

Bánh Mì, like other internationally famous dishes such as phở, spring rolls and broken rice, was traditionally eaten as a cheap and quick meal. Commonly eaten for breakfast, the sandwich was convenient for commuters and students who had to eat on their way to work or school.

Today, the Bánh Mì can be found anywhere where there’s a strong Vietnamese diaspora community, leading to many variations on the classic sandwich formulated to fit the local taste and preferences of the community.

Despite these differences, there are a few elements which are endemic within each and every Bánh Mì. Here’s what they are:

The star of the show. You can’t have a Bánh Mì without a Bánh Mì!

Like we mentioned before, the term “bánh mì” traditionally referred to a bread or French baguette. It wasn’t until the sandwich became popular around the world that a new understanding of the word was adopted.

What makes a Vietnamese Bánh Mì so special?

It’s all in the bread.

Unlike French baguettes which are usually longer and denser in shape, Vietnamese baguettes are shorter, light and flakier. Cut lengthwise, the texture and overall flakiness of the crumb makes it a perfect vehicle to deliver all of the delicious ingredients that can be found in a Vietnamese Bánh Mì. The bread tenderly gives way to paté, then creamy mayonnaise before cuts of pork and crisp bites of pickled vegetables enter into the equation forming a perfect harmony of textures.

It wouldn’t be a Bánh Mì without the bread. This is so true that many Vietnamese delicatessens, Ba Le Deli included, bake their own baguettes in-house. The proof is in the pudding, as they say, but in this case – the proof is in the bánh mì!

Paté is common in all Bánh Mì, and for good reason. The creamy and savory spread makes adds an unique flavor to the sandwich that can’t be found anywhere else.

Commonly made from pig’s liver and a mixture of meat, vegetables and spices, paté is what keeps the Bánh Mì from getting too dry. While pre-made paté is readily available in most supermarkets, many Bánh Mì places, Ba Le Deli included, create their own blend in-house.

This way, they can create a unique flavor and accompaniment to their sandwiches that are exclusive to that store.

The second, saucey accotrument to a Bánh Mì, mayonnaise is spread on the baguette to prevent the sandwich from getting too dry. Originally, mayonnaise was meant to substitute the cheese and butter that French colonizers had imported and enjoyed with their baguettes. Since Vietnam hosts a tropically hot and humid climate, such dairy products would not keep long under the Vietnam sun.

The substitution of mayonnaise had the dual effect of increasing the shelf-life of the sandwich as well as making it portable – allowing it to be eaten anywhere and on-the-go.

It wouldn’t be a sandwich without the filling, and the Bánh Mì is no exception. Similarly to the French, the Vietnamese had meat accompany their bread.

The exception? They placed it inside the sandwich instead of outside.

Where the French ate their meats and breads on a spread similar to a charcuterie board, the Vietnmese needed something convenient and portable to fit in with their bustling and slowly modernizing industrial life. In many ways, the Bánh Mì was an invention of necessity – an affordable yet delicious way to enjoy a full meal without having to sit down and stop to eat it.

Today, Vietnamese cold cuts are still a mainstay of the Bánh Mì. Ham, Vietnamese sausage and minced pork are commonly included in Bánh Mì around the world, with some electing to use grilled meats instead. The saltiness that cold cuts deliver provides a refreshing contrast against the other ingredients included in the Bánh Mì.

It wouldn’t be a Bánh Mì without vegetables, and with a Bánh Mì, it’s all about freshness. Pickled daikon radishes and carrots, cucumber and cilantro are commonly included in Bánh Mì to give the sandwich a fresh bite, with some Bánh Mì vendors including mint, scallions and even chili.

These vegetables add a crunchy texture to the sandwich and helps cut the richness and fat from the pâté, mayonnaise and cold cuts. They’re an essential ingredient in Bánh Mì but if you’re not particularly interested in some of the extreme flavours that some of these herbs provide, you can always ask your sandwich artist to opt out from including them! \

While these ingredients are commonly included in all Bánh Mì, that doesn’t mean you have to include them in yours!

The best part about visiting a local Vietnamese delicatessen is that you can be the master of your own sandwich. If there’s something you don’t like and want excluded or something that you love and want extra of, just let your sandwich artist know! At Ba Le Deli, we love serving our community and have been doing so for more than 30 years. Let us customize your sandwich specifically to your liking so you can experience the taste and freshness of an authentic Vietnamese Bánh Mì.

Get Them Before They're Gone!